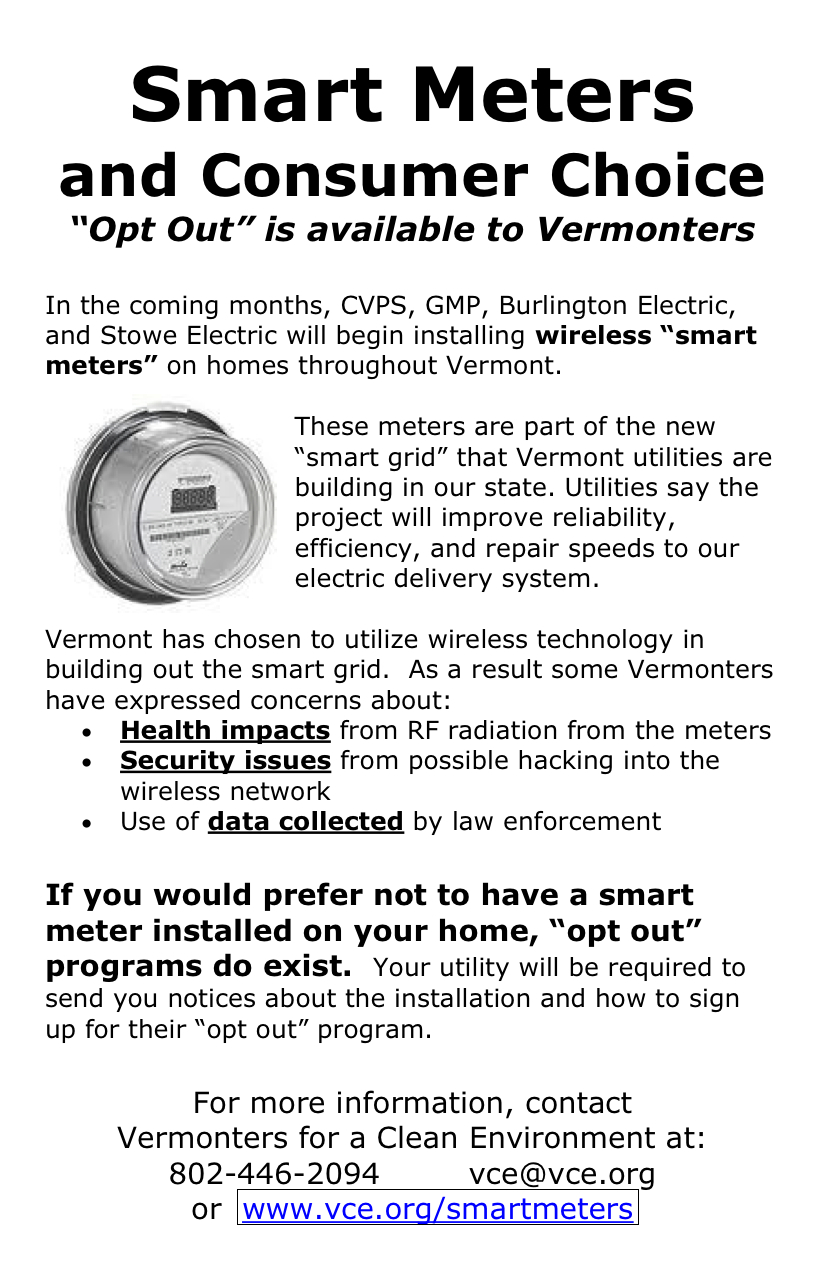 
GMP, Burlington Electric, and Stowe Electric info on smart grid.
--Contact your utility to opt out. You can opt out at no charge and you do not have to give a reason. If you already have a "smart meter" and do not want it anymore, your utility must remove it upon request.
--Contact the Department of Public Service to recommend hard wired technologies instead: Jim Porter, Director of Telecommunications, (802) 828-4003, james.porter@state.vt.us
--Submit Public Comment in Docket #7307 to the Vermont Public Service Board: Clerk Susan.Hudson@state.vt.us
--Contact Governor Shumlin to recommend hard wired technologies instead: GovernorVT@state.vt.us, (802) 828-3333

The page contains information you need to decide whether the purported benefits of a smart meter outweigh the documented risks to health, safety, privacy and cybersecurity.

Appliances and devices that are electrically connected in the home (plugged into home electrical wiring) can experience radiofrequency bursts of high enough intensity to cause malfunction and/or damage.

There have been over 100 complaints in Maine about interference issues.

Wireless radiofrequency radiation from smart meters can cause medical devices to stop working. Medical implants such as pacemakers and deep-brain stimulators used to control the shaking of Parkinson’s disease can be turned off by the radiofrequency interference (RFI) caused by the signal. These signals are already reported in published studies to interfere with critical care equipment, ventilators, pain pumps, wireless insulin pumps and other medical devices.

Dizziness, migraines, nausea, vomiting, muscle spasms, insomnia and heart palpitations are some of the symptoms reported around the country after smart meter installation. Smart meters transmit throughout the neighborhood in intense bursts, thousands of times during the day and night. Scientists have compared the intensity of each burst to 100 times the radiation from a cell phone.

The World Health Organization recently classified this type of wireless radiation as a “carcinogenic hazard,” putting it in the same possibly-cancer-causing category as engine exhaust, chloroform and DDT

Unlike cell phones and Wi-Fi, smart meters and the neighborhood collectors are involuntary exposure, and cannot be turned off.

The type of radiation emitted by a smart meter can cause changes in the biology of the body. This radiation promotes degenerative diseases and premature aging even at levels of below FCC limits.

Numerous other risks to human health from radiofrequency/microwave (RF/MW) radiation exposure, particularly to children and people with disabilities, at levels below the current FCC limits are summarized in articles published in the March 2009 issue of Pathophysiology.

Smart meters send and receive wireless RF/MW signals throughout homes and businesses. These smart meter RF/MW levels are far higher than those already reported to cause health risks. Compliance is not safety, since the existing FCC safety limits are under challenge, and have already been called ‘insufficient to protect public health’ by some federal agencies.

Concerns about the security of the US electrical grid have received widespread media coverage (Wall Street Journal, April 27, 2009). Smart meters present a new vulnerability to intentional sabotage as well as to inadvertent access to private information, since the network is wireless and it adds direct linkage to home computers and personal data.

The wireless network proposed to enable smart grid and smart meter technology is a full-saturation, full-coverage blanket of RF/MW  radiation into every home and business that can increase the points of entry to malicious software (malware), to electrical service disruption or disconnection, and to terrorist attack on the electrical and communications grid throughout the US (Wired.com, March 4, 2010).

CNN launched a “Cyber Shockwave” program on February 20, 2011, that detailed national concerns over the security of the Internet and of wireless communications, which makes us vulnerable to loss of the electrical grid, Internet and wireless communications across the country. Banking, transportation and the electrical grid had the biggest vulnerabilities.

In addition to overbilling issues, many experts also warn that smart meters could cost consumers more money than they will save. Consumers Digest (Feb. 2011) did an investigative report exposing the fact that in order to fully utilize the smart meter home area network (HAN) that monitors how much electricity is used by different appliances, customers will have to spend hundreds if not thousands of dollars in new appliances, each one outfitted with its own transmitter.

The use of wireless networks to transmit information and data leaves open the potential for misuse of personal data, billing and usage information, and other private information.

Connecticut Attorney General George Jepsen studied that state’s smart meter pilot program and concluded that there was no energy savings.

“The pilot results showed no beneficial impact on total energy usage,” Jepsen said. “And, the savings that were seen in the pilot were limited to certain types of customers and would be far outweighed by the cost of installing the new meter systems,” he said.  “Also, the existing meters, installed between 1994 and 2005, have a useful life of 20 years and replacing them early would incur additional costs for customers,” Jepsen said.

Smart meters cause arcing, interfere with Ground Fault Interruptors (GFIs) and have been implicated in fires, especially in homes with older wiring

Once you know more about the serious and documented risks, it’s up to you whether to keep your existing meter or request your utility remove the installed "smart meter".

Thanks for getting informed!


adapted from http://smartmetersafety.com/2011/09/14/smart-choices-about-smart-meters-critical-issues-to-consider-in-deciding-whether-to-opt-out/ – thanks to the Maine Smart Meter Safety Coalition for this information

David Carpenter, director of the Institute for Health and the Environment at the University of Albany’s School of Public Health, discussed scientific research and recent findings on the health effects of smart meter radiation.

Vermonters for a Clean Environment