Testimony on
Issues Surrounding the Sale of Vermont Yankee


My name is Annette Smith. I live in Danby. I am Executive Director of Vermonters for a Clean Environment, a grassroots organization formed as a result of the proposed natural gas power plant and pipeline project in southwestern Vermont. For the past two years, I have been following energy issues regionally and nationally, with emphasis on natural gas, energy markets, and deregulation.

My comments today are not directly related to who buys Vermont's nuclear power plant or for how much. I agree with others who feel that the case before the Public Service Board concerning the sale of Vermont Yankee is and should be insulated from politics. VCE is not a party to that case and we do not intend to intervene in that docket.

The energy marketplace is changing so fast that it is hard for people, even those in the industry, to keep up. Vermonters are watching the proposed sale of Vermont Yankee, arbitration over the Hydro-Quebec Contract, a restructuring docket before the Public Service Board, and other utility issues that await resolution. Everyone seems to be holding his breath waiting for all these issues to be resolved before entering into a discussion about Vermont's energy future.

I would like to suggest that right now is the time to be talking about Vermont's electricity issues. Should Vermont Yankee be sold, or should it remain under the ownership of Vermont's regulated utilities, maintaining the status quo? What is most likely to happen if we stay the course the utilities are on, selling Vermont Yankee, getting out of the Hydro-Quebec contract, and embracing the current fantasy of "consumer choice" and "retail competition?"

The energy marketplace has been rearranged to maximize profits for industry, especially the very large companies who own the merchant power plants in the deregulated markets and the companies making money on commodities trading. Market forces are being configured to drive up the price of electricity. The marketplace is not being rebuilt in favor of ratepayers.

It is in that context that Vermonters need to reconsider the sale of a valuable asset, the Vermont Yankee nuclear power plant.

In preparation for my testimony today I consulted the many sources I developed over the course of two years dealing with energy issues. Almost everyone I contacted suggested, without prompting, that Vermont Yankee should not be sold at this time. It is a known source of power at a fixed price, and is a depreciated asset. Ratepayers have been paying into a decommissioning fund that is deemed to be adequate, and the 12 years left on Yankee's license gives time to plan for alternative sources of energy.

This shift in predictions about future energy supplies is the main reason there are now so many suitors bidding for Vermont Yankee. But it should also cause Vermonters to pause and ask whether or not it is in our best long-term interests to sell this increasingly valuable asset. Yankee is financially a safer bet than natural gas generation, especially for the next 12 years.

One of the companies bidding for Yankee initially stated their intention to extend the plant's license for another 25 years past the planned expiration of its license. Such a scenario should also give Vermonters pause. There is still no solution to the spent fuel rod storage problem. Should Vermont sell the nuclear power plant to an out-of-state or foreign company whose sole interest is in maximizing profits for its investors? The attraction of this plant is short-term profits for whoever buys it; their risk is that it will not be relicensed. The decisions will be based not on what is best for Vermonters or ratepayers, but on optimizing dividends for investors.

A ruling last month by the Federal Energy Regulatory Commission (FERC) could cost electricity users in Maine and throughout New England millions, possibly billions, of dollars. An article in the Bangor Daily News [Exhibit 1] says "State energy experts in Maine are calling the decision "bizarre," saying the only ones to benefit from the federal ruling are the national companies that own most of the power generators in the region. These businesses will gain the millions, possibly billions, of dollars that ratepayers could be forced to pay starting in the next few months." [Exhibit 2] is another article on the same subject].

The owners of generating plants have adopted computer-driven dispatch models aimed at maximizing returns. They don't cycle the plants to maximum output until the price is extremely attractive. This practice is called "gaming". If Vermont's utilities successfully get out of the Hydro-Quebec contract, replacing that power by making purchases on the open market is likely to result in higher prices and volatility. Shutting down Vermont Yankee, as planned in 12 years, will assure reliability now and less waste for future generations to deal with. Vermont Yankee can continue to be a reliable source of power in the region and for Vermonters while we look for workable alternatives. This is not the time to sell it.

But what if Vermont's utilities sell Vermont Yankee, get out of the Hydro-Quebec Contract, and enter a competitive marketplace. Look around us. Instead of Central Maine Power, Public Service of New Hampshire, and Niagara Mohawk, we now have Energy East, Northeast Utilities, and National Grid USA [Exhibit 3]. The trend of mergers and acquisitions in the industry pretty much guarantees that one of those three large companies is planning to purchase CVPS and GMP, and with them goes controlling interest in VELCO, Vermont's grid. It is geographically obvious that Vermont would serve as a conduit for power and gas transmission to urban areas south of Vermont, something that would be necessary for those company's plans to generate huge profits.

Of special concern to VCE is Energy East. Energy East bills itself as a Super Regional Energy provider. After Maine's utilities sold their generating assets, Energy East purchased Central Maine Power -- the deal was done before the average public heard about it. Energy East has purchased energy companies in New Hampshire, Massachusetts, and Connecticut, and has clearly set its sights on Vermont's largest utilities.

Energy East is the parent company of NYSEG, New York State Electric & Gas. NYSEG is the company that came into southwestern Vermont under the name of Southern Vermont Natural Gas. They called property owners into private, closed-door meetings where we were told they would take our land for their project whether we liked it or not. They were arrogant and they were not honest. I called New York State's Department of Public Service and asked them about NYSEG and the way they were operating in Vermont. They told me that the company has a history of upsetting property owners in New York, and the DPS there knows to watch them.

Nobody was watching out for us -- not the Vermont Department of Public Service, which is supposed to advocate for the public interest; not the Public Advocate in the Office of the Public Advocate. If anyone had been willing to open his mind enough to talk about the issues surrounding natural gas generation, and projections for future price and supply, instead of buying into the industry sales pitch, we could have saved a lot of Vermonters' time and money.

We have experienced Energy East's corporate mentality and habits close-up, and we do not recommend doing business with them.

Is it a good idea to let the free market rule in electric generation and distribution? Unlike any other commodity, electricity is used immediately. It cannot be stored or saved until the market needs it. As we can see from the airline and telephone industries, deregulation may lower prices, but consumers can also expect a decline in service. Reliability of electric service is key to economic stability, and ratepayers have always benefited most from a regulated and controlled environment. A look at the most successful of the states experimenting with deregulation and competition reveals, at best, a complex world for consumers. At worst, look at California.

In California, consumer advocates are now calling for municipal power, a state power authority, a publicly owned grid. Never again will they give up local control of their electric generation and distribution. Many will argue that the problem in California is with the way they structured their legislation, or over-reliance on natural gas, or failure to build new generation; but no one can argue with the fact that the market power is in the hands of the owners of the generators.

Right now, Vermonters have the opportunity to become involved and informed about electricity issues and make smart choices for the future. Vermont's complex energy issues can be illustrated by drawing an analogy to a train [Exhibit 4]: 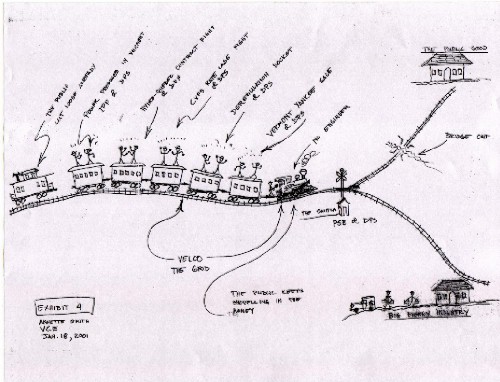 This train has an engine, but no engineer. The public keeps the train fueled by shovelling in money. Each of the cars in the train represents a different fight being waged before the Public Service Board or other arbiters: the sale of Vermont Yankee, the Restructuring docket, the CVPS rate case fight, the Hydro-Quebec contract, the Independent Power Producers' Contract; and at the tail end is the public, cut loose from the rest of the train and coasting along with no one clearly advocating for their interests. We are nearing a fork in the track, and time is running out.

The right fork is the course we are on, full speed ahead. Centralized generation and long distance transmission will remain the norm. This is the scenario that is most likely to happen, unless we do something about alternatives now.

The left fork quickly brings us to an impasse -- requiring Vermonters to sit down and talk about the public good and the public interest. Imagine what could happen if we changed the order of the cars in the train, putting the public right behind the engine, in front of industry interests. Can Vermonters work together to arrive at a consensus on our electricity future?

What choices do we have?

A) Maintain the status quo. Prices may remain high, but will escape the volatility being experienced elsewhere.

B) Municipalize the private companies and create a Public Power Authority. Aggregate the state's power needs by acquiring all the providers, then consider selling the generation assets, and set up a bidding process for the state's generation needs.

The New England region's peak electricity load is about 24,000 megawatts. Vermont's is about 1,200 megawatts. The state's relatively small energy requirements present us with some unique opportunities to benefit from renewable energy technologies and move away from dependence, towards independence.

How can we empower Vermonters to take more responsibility for our energy needs? Are we willing to try? Or will ratepayers continue to be victims of some other interest's profit motive. If we are going to work together for the public good, now is a good time.